It is only when, for the first time, that you see one of these COLOSSAL creatures in their element do you realise how small species we are – and yet able to cause so much damage to the world’s greatest biome that the Great whales live in.

These great whales are frequently found along the coasts of South Africa as the currents that pass through the Indian Ocean bring up-welling’s of nutrients and food to feed these 20 tonne giants. This is where the fresh, cooler waters from Antarctica meet with the warmer currents of the Pacific. However the main reason for the presence of the whales is to mate– this is literally a clubbing lek for whales wanting to find love, and also for mothers to give birth to their calves. Many locals have told me about remarkable sightings of females being pursued by amorous males for many kilometres on end, what sight that must be!

Their numbers are slightly increasing since the 1970’s ban imposed by the Whaling Union in Durban, and the dreadful practice of killing these magnificent mammals has halted. Most people now see the whales as being more valuable alive than dead which is huge plus. The whaling industry was hugely prolific back in the 1950s, from the shores of Argentina and South Georgia, (in particular during the Falklands war). South African whaling stations along the coast were also being established along False Bay where the meat was processed, where you can see remnants of the place today. Namibia also had a large station as well as Durban and Cape Town as well as in New Zealand and South Australia.

Thankfully, there are dedicated researchers setting off into the blue in all weathers to study different species and populations around the entire coast of South Africa. This is principally conducted by aerial photography, isotopic DNA analysis from  samples as well as fin photography. Through identifying individuals, the researchers are able to determine the return of philopatric individuals, where previous calves were born and returned to their birth place to mate and give birth themselves. Humpack whales in particular are attuned to this cycle. They will take 3 years to recover from giving birth, as it’s a very energetic process. I’m pretty sure if I was that big and gave birth to a 4m, 1.5 tonne baby I’d be in no hurry for more… 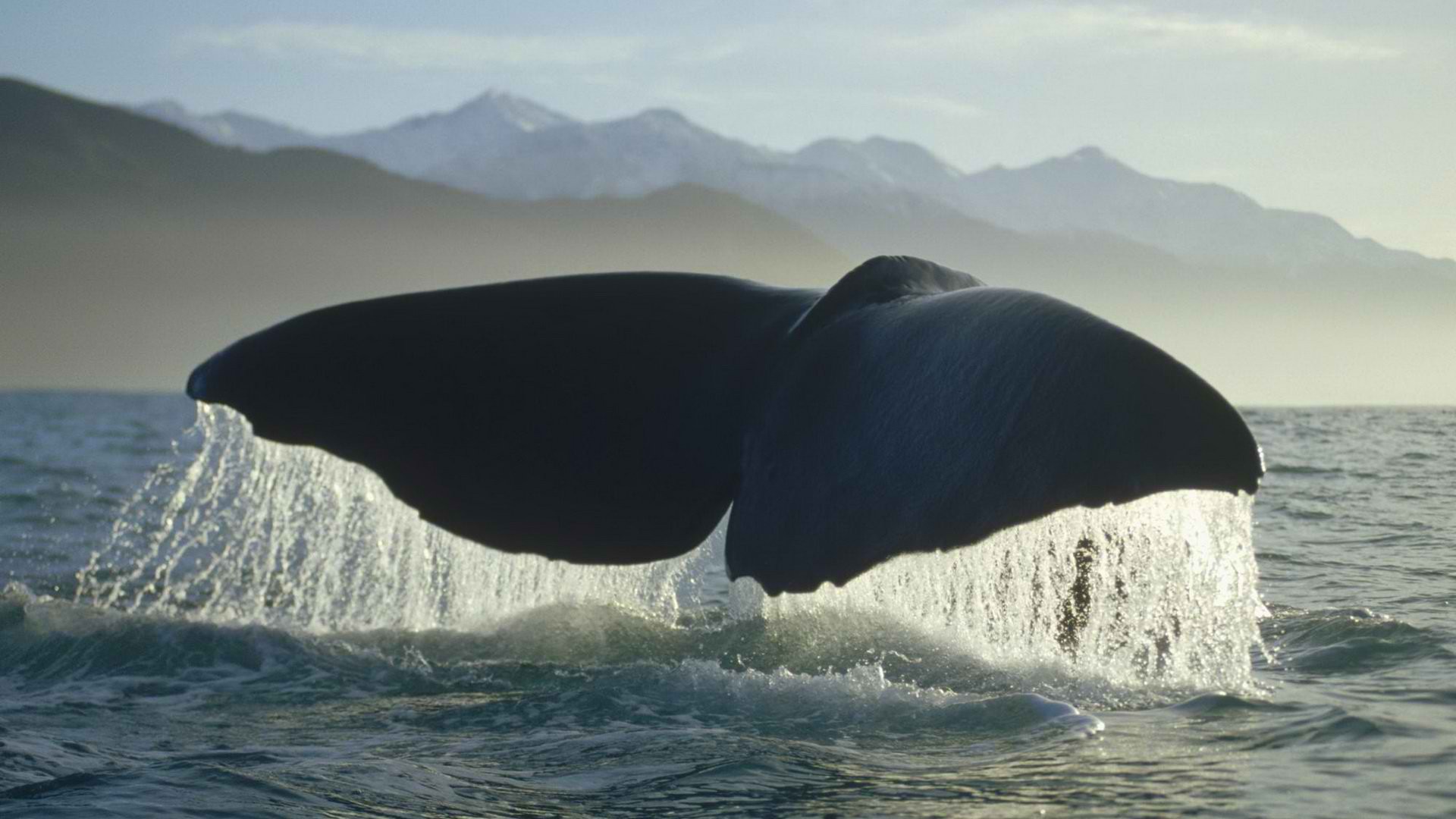 To see whales in their natural environment has always again been a life-long ambition. Watching Sir David Attenborough documentaries, and seeing incredible camera operators such as the multi-talented and hardy Doug Allen and Diddie made me want to come into contact with these gentle giants myself. Ocean Safari’s made this possible with their coastal tours of Plettenberg Bay, they are the oldest whale watching tour guides on this part of the coast and offer discounts to volunteer students (was 800 rand, now to 500 rand which is around £25-27) for 3 hours of whale watching. You have different excursion times from 9:00am, 12:00 and 2:00pm daily throughout the whole week (weather dependent). So you should always call up if you want to have a tour and book it.

The different species of whales you can see include Southern Right, Humpack whale, Brydes whales, and bottle nose dolphins, common dolphin, sharks, cape seals and Orca! The possibilities are endless. The Captain of the Ocean Dafir’s was Marvin, who was an expert sailor- and I asked him how long he’d been sailing this particular vessel- and his response of 15 years assured me that we would be in good company and able to see and spot the whales. Our guide was equally qualified and friendly to us all. We had a quick safety briefing as usual and then headed off to the Plett central beach bay with our life jackets.

We were ready to set sail!

Thrash! We speed off towards the sea and jet stetted off towards the headland of Roberg where the Cape Seal colony resides. The weather had improved significantly compared to the previous day, although clouds did loom ominously in the distance. I had taken my trusty sea sickness tablet, Kwells, which I would recommend taking even if you “don’t get sea sick,” just because it give you that reassurance. I warn you, you WILL GET WET.

Do take a rain jacket if the company you go with doesn’t provide you with one. The sea salt will leave you looking like a shipwrecked drugged up model with sea salted hair but don’t let that put you off! It was glorious bouncing along the Indian Ocean, and being kissed by the spray peppering our face. As we approached the seal colony everyone grabbed their cameras and gasped at the extent of the Seals climbing abilities. These were apparently the highest climbing seal colonies in South Africa, some at least 40m above the progressively swelling sea that thrashed against the rocks, sending a jet of white foam into the air like flecks of white paint. 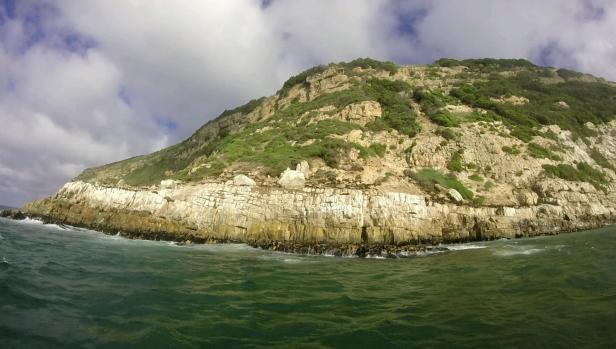 Above is Roberg, a fantastic place to hike and below the seal colony is visible as well as the whales and sharks!

Posing for the camera! Cape Seals on the rocks. There’s a fantastic opportunity to “Swim with seals” which is run by the same company. 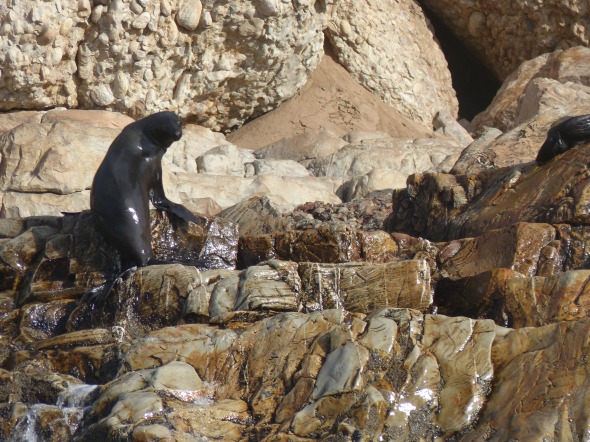 I’m not going to lie, I was a little perturbed by the size and progressive onset of swells that efficaciously emerged from the seemingly endless ocean- this was my first experience on a boat on a choppy day. I have previously been on a dolphin safari in Spain, but the waters were tame compared to this. As we bounced along the sea, we kept focusing on the sea horizon, and the reassuring words of our friendly guide who assured us we would see Whales, and to keep looking out for the spouts of spray. The humpbacks and Southern Right whales have the two blow holes from which they breathe when they surface.

The sound they make as they breach is a characteristic “ptfffffffff” which is seemingly imperceptible amongst the sound of the waves and wind resonating through the hull of the boat. Everything seemed to be a Whale, every wave! After 30 minutes even I was beginning to lose hope and wish the trip was over as my stomach began to churn…but then I saw the cool waters break and an immense grey dark shape emerged from the depths and glided across the surface effortlessly, the afternoon light reflecting profusely along its streamlined body- it was a Humpack!

“Over there!” I gasped in awe.

The captain and guide then followed my hand signal to my surprise, was it a whale or did I imagine it? Nevertheless we sped on, and then there it was again, the spouting and the appearance of the whales back, this time accompanied by a miniature version of itself- a calf! This was a female travelling with its mother, perhaps one that had been born there and now off to feed. They did indeed seem to be hungry and moved with remarkable speed. I had no time at all to take photos, and so filmed everything on the GoPro. I would recommend the same. The water and spray could really damage your camera, and the Gopro on the selfie stick works wonders as a stabiliser.

We followed them towards the north and Roberg, and then were surprised to see yet another whale join us at the side, and fluked with its broad and knarred tail, slipping once more into the deep dark depths of the ocean. It’s truly was magical. Then to top it all off, one of the males breached and its immense body left the waters for seconds, water streaming down its muscular and colossal body, and then landed with an all mighty splash. Wow! We saw a few more sightings of the mother and calf, and I believe we saw up to 4 individuals all busy on their way to feed or mate…

And then all of a sudden as soon as it had started, it was all over, and the skipper had already extended our trip to get further views, and so we headed back past the seal colonies. I spoke to our guide about any BBC film crews that had shot in these waters, and apparently Dolphin Army was filmed off these waters! I mentioned my plans to film in South Africa as part of my final film project next year, and he said that they would be more than happy to accommodate students! Score!

So who knows, I may return to film some of these remarkable marine species in more detail the following year. But if you’re around Plett or South Africa in general, I can’t recommend a Whale Safari more highly, it’s one of those experiences that never leaves you, and it’s now made more aware of what we’re putting into our oceans. As part of the #BigBlueLive filming that will shortly hitting our screens on the BBC, I think it’s vital that we get behind our gentle giants of the oceans and keep putting pressure on our governments to create more marine reserves around our waters in the UK and worldwide. Happy Whale watching!