Okay so bats might not seem frightfully important to us…surely they’re nothing more than flying rats? You’d be mistaken! These incredible mammal species are a highly evolved flying and echolocating species- the only ones to do so. They ensure our skies aren’t ridden with biting insects, prevent crop damage, provide medicine in the form of draculin, give vision to the blind and lets be honest, MAKE Halloween! I conducted 10 months research on them a year ago, and here’s what I found out about how our urban lifestyle is impacting them in the UK.

Importance and impacts of an urban landscape on bats: Urban foraging

Each bat has evolved is perfectly adapted to each habitat, in terms of wing morphology, diet (ecological niche), echolocation call, hibernacula and behaviour (Altringham, 2011; Threfall et al., 2008). Thus, it is of vital importance to study the effects of particular habitat features on bats, as each specie uses the landscape differently (Altringham, 2011, Coleman & Barcley, 2011).

Some exhibit behavioural plasticity and can adapt to urban environments, enabling them to effectively exploit their habitat without the disruption of roads, light pollution or buildings (Russo & Ancillotto, 2014; Stone et al., 2011). 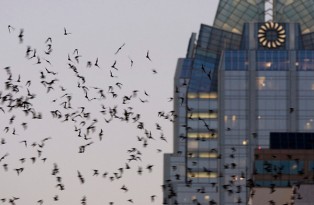 This has been seen in bats with long narrow wing morphology with a high wing loading, as open air foragers are largely unaffected by urbanization (Norbeg & Rayner, 1987).

The ability of synanthropic bats to dominate urban foraging areas can be problematic for the less well adapted species (Silvis et al., 2014, Russo and Ancillotto, 2014). Urbanization may result in greater competition between the synurbic and less well adapted species. Arlettaz et al., (2000) suggested that the decline of Rhinolophus hipposideros in Wales may be due to the expansion of Pipistrellus pipistrellus, whose populations have increased as a result of greater feeding efficiency with artificial lights normally avoided by the lesser horseshoe bat (Warren et al., 2002; Lacoeuilhe et al.,  2014).

Bats are vulnerable to evaporative water loss as a consequence of their morphology and large surface area to volume ratio (Razgour et al., 2010). Within urban areas, open artificial sources such as ponds, ditches and swimming pools provide bats with fundamental opportunities to drink and forage.

Such examples can be seen in North Carolina, where studies looking at the importance of managed water bodies over natural wetlands revealed significantly higher bat activity by heliponds, despite equal densities of insects at both sites (Vindigni et al., 2009). Equally, studies on Greek islands showed that bats will also use artificial water sources such as swimming pools due to the lack of natural sources in such arid habitats, with minimal annual rainfall (Davy et al., 2007).

So this Halloween, cast a glance into the skies at night and spare a thought for this remarkable little evolutionary quirk of nature…

One thought on “Urban Ecology and Impacts on Bats”